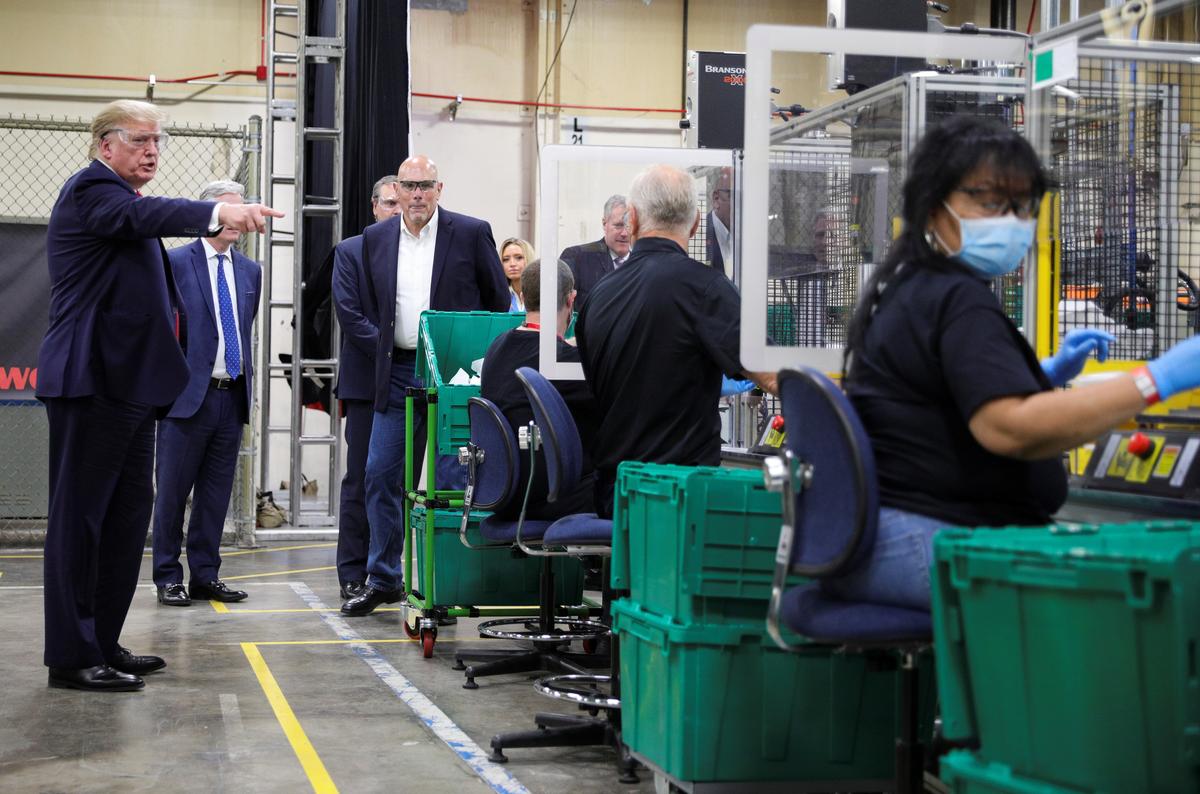 PHOENIX (Reuters) – Without wearing a face covering himself, President Donald Trump toured a new medical mask factory in Arizona on Tuesday, taking a rare trip out of Washington to visit a state he hopes to win in the November election even as Americans avoid travel to slow the spread of the coronavirus.

U.S. President Donald Trump points as he watches workers on the assembly line manufacturing protective masks for the coronavirus disease (COVID-19) outbreak during a tour of a Honeywell manufacturing facility in Phoenix, Arizona, U.S., May 5, 2020. REUTERS/Tom Brenner

Touching down in Phoenix in midafternoon, Trump visited a Honeywell International Inc factory making N95 face masks for healthcare workers. The facility was rushed into service in less than five weeks because of a shortage of the protective equipment.

The president did not wear a mask at the factory, even though workers at the facility did, and he told reporters at the White House that he would likely do so.

A sign was visible on Trump’s tour that read, “Attention: Face Mask Required in this Area Thank You!” Honeywell Chief Executive Officer Darius Adamczyk spoke before Trump gave remarks. Adamczyk also did not wear a mask.

The federal government has encouraged Americans to wear masks to avoid spreading the virus even when not feeling any symptoms of COVID-19, the respiratory disease it causes. Trump has so far declined to wear a mask himself.

Trump has sought to give an optimistic view about the country’s ability to recover from the virus and is eager for states to reopen businesses whose lockdown closings have crushed the economy and left millions unemployed.

In Arizona, Trump also participated in a discussion about supporting Native Americans. He took the opportunity to argue that the U.S. economy should be reopened quickly.

The president confirmed his administration’s plans to wind down the White House’s coronavirus task force as it focuses a new phase, the aftermath of the pandemic.

Asked if he would receive a coronavirus vaccine as soon as one is developed, Trump said he would but also might decide not to if that was deemed better for the country.

The location of Trump’s first trip out of Washington in weeks was not coincidental.